For 10 years I've sent guests over to Hillsborough to see the early 19th century stone arch bridges.  Often I arm them with a brochure “Hillsborough’s Stone Arch Bridges” published by Hillsborough’s Chamber of Commerce years ago.   I fear I will soon run out of the brochure so I’m going to capture some of the highlights here.  I am not going to try to give you each turn and mile marker because the discovery process is part of the fun of this tour.  If it’s in quotes, it came from the brochure.  The tour is one of my personal favorite drives and I took some friends from Chicago on it in September.  Even before the leaves change, it’s a beautiful ride.

This week we hosted some enthusiastic leaf peepers – Ken and Dianne from Alberta.  Dianne bought the hat at her first stop in New Hampshire and proudly wore it through out her stay.  Her photos are testimony to the pursuit of colors and the joy of wandering.  Thank you for letting me share them Dianne! 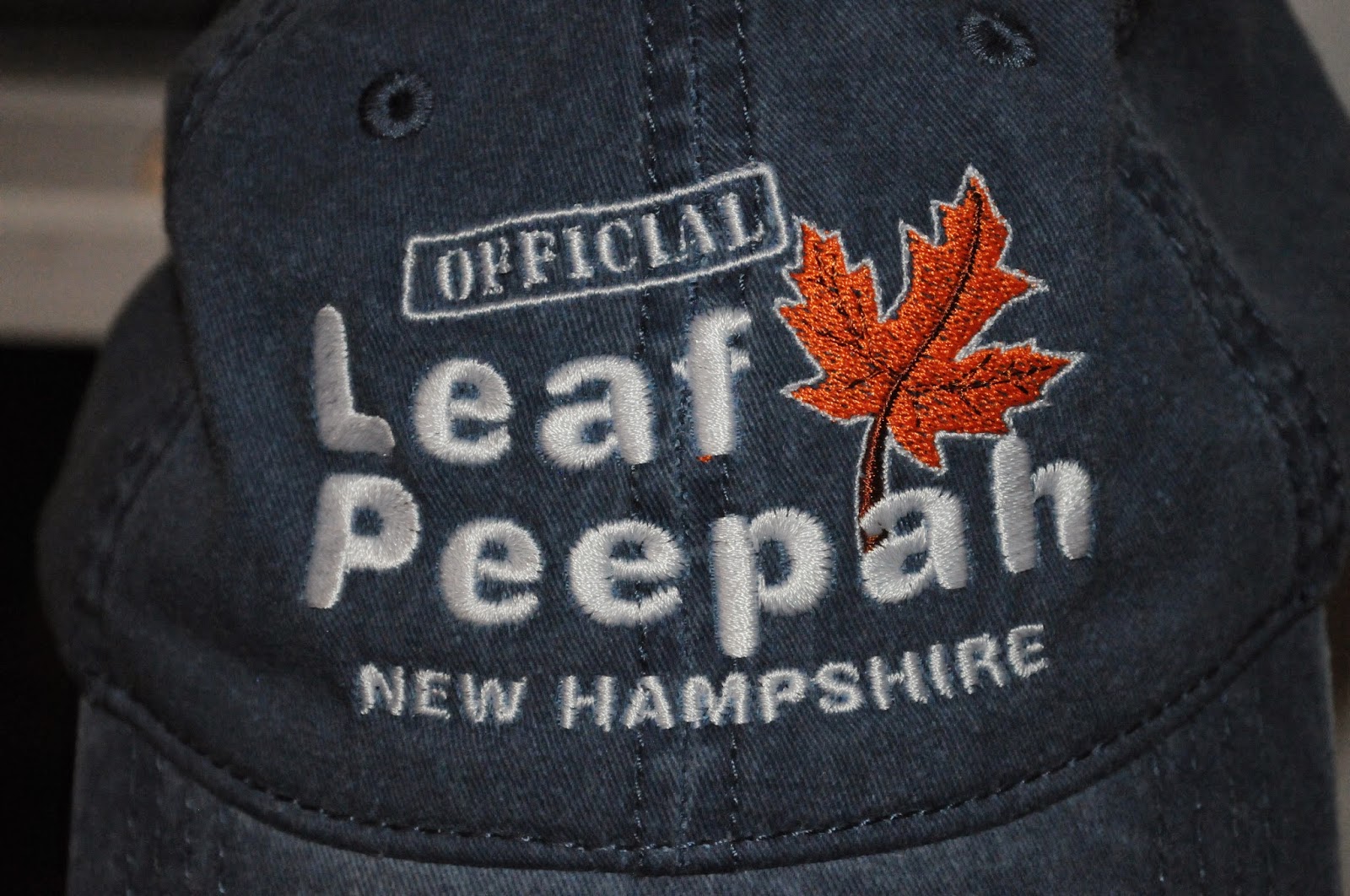 Our stone arch bridge up river from Henniker House’s breakfast room (and seen in many Facebook photos https://www.facebook.com/Hennikerhousebnb?ref=hl) was first built in 1835 and rebuilt and widened in the late 20th century.  The ones in Hillsborough are on smaller, often dirt roads and remain much as they were when they were first built.

There are two ways to head out to Hillsborough from Henniker House.  One follows the Currier & Ives Byway (http://currierandivesbyway.org/) west from us and crosses the Contoocook River near the old paper mill site.  There are several opportunities to get out of the car and get close to the river.  The other ride is along the ridge on the south side of the Contoocook, past the Ocean Born Mary house (http://www.hennikerhistory.org/obmary.htm) and other 200+ year old center hall colonial homes.  Each route gives some insight to the way folks lived or the needs to have solid structures to cross our streams and rivers.

“These bridges are registered as historical structures by the Historic American Building Survey, part of the National Park Service.  Most recently they have been recognized as a National Historic Civil Engineering Landmark, the second in New Hampshire after the Cog Railway.

Stone arch bridges were a solution to the weakness of timber bridges and were especially suited for withstanding frequent flooding in the steeply sloping New Hampshire streams and rivers.”

So after wandering a bit, you’ll end up in Hillsborough’s “Bridge Village” – a late 19th century Main St with German John’s Bakery (worth the stop – on the trip with Greg & Sue, we picked up pretzels to sustain us).  Then head out School St/Center Rd to “Hillsboro Center” historic district.  This is where the Hillsborough Artisans do their Summer Fair.   Settled in 1769, Hillsborough Center has over a dozen 18th and 19th century homes, two churches, a clubhouse and an intact one-room schoolhouse. 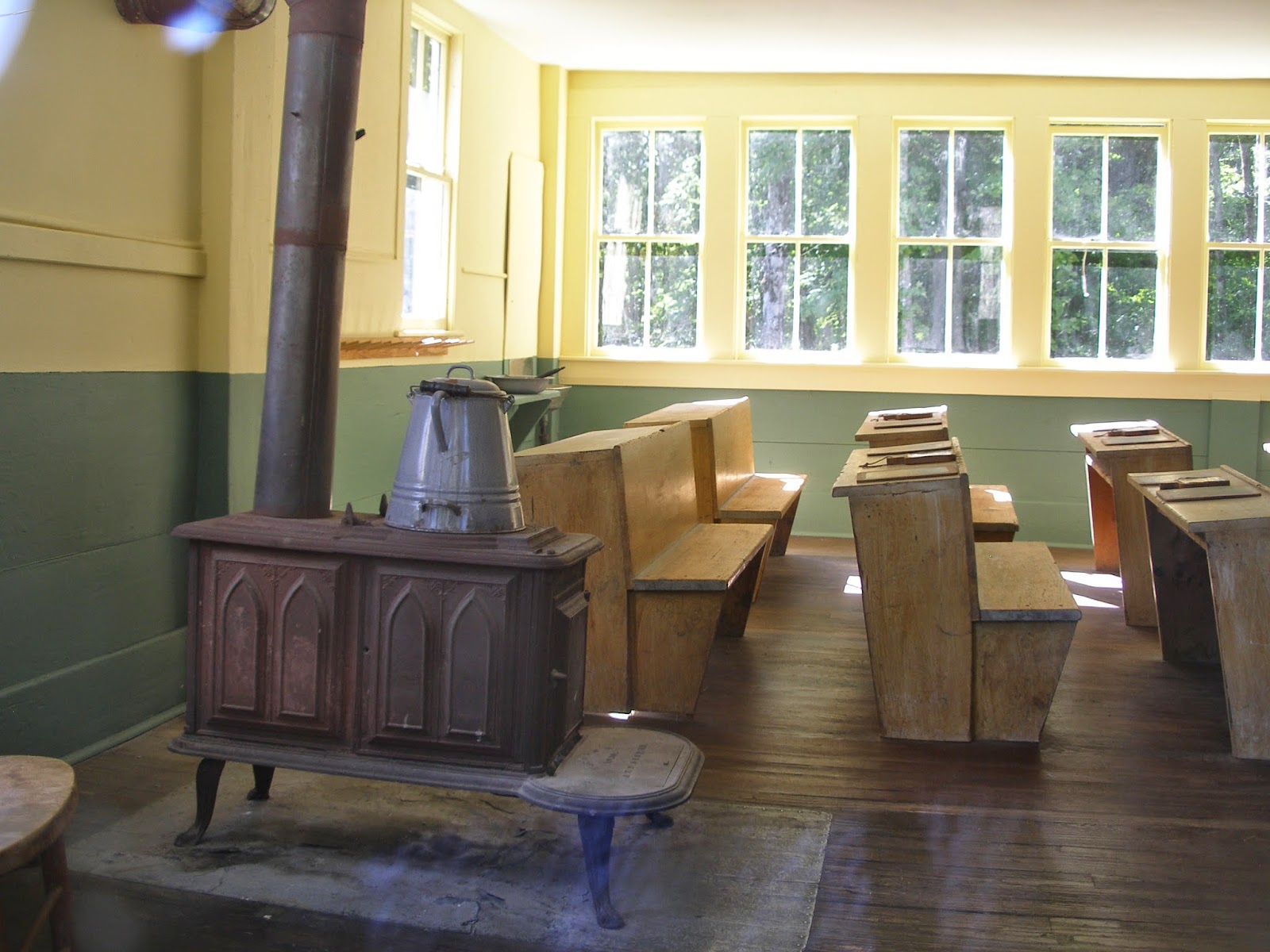 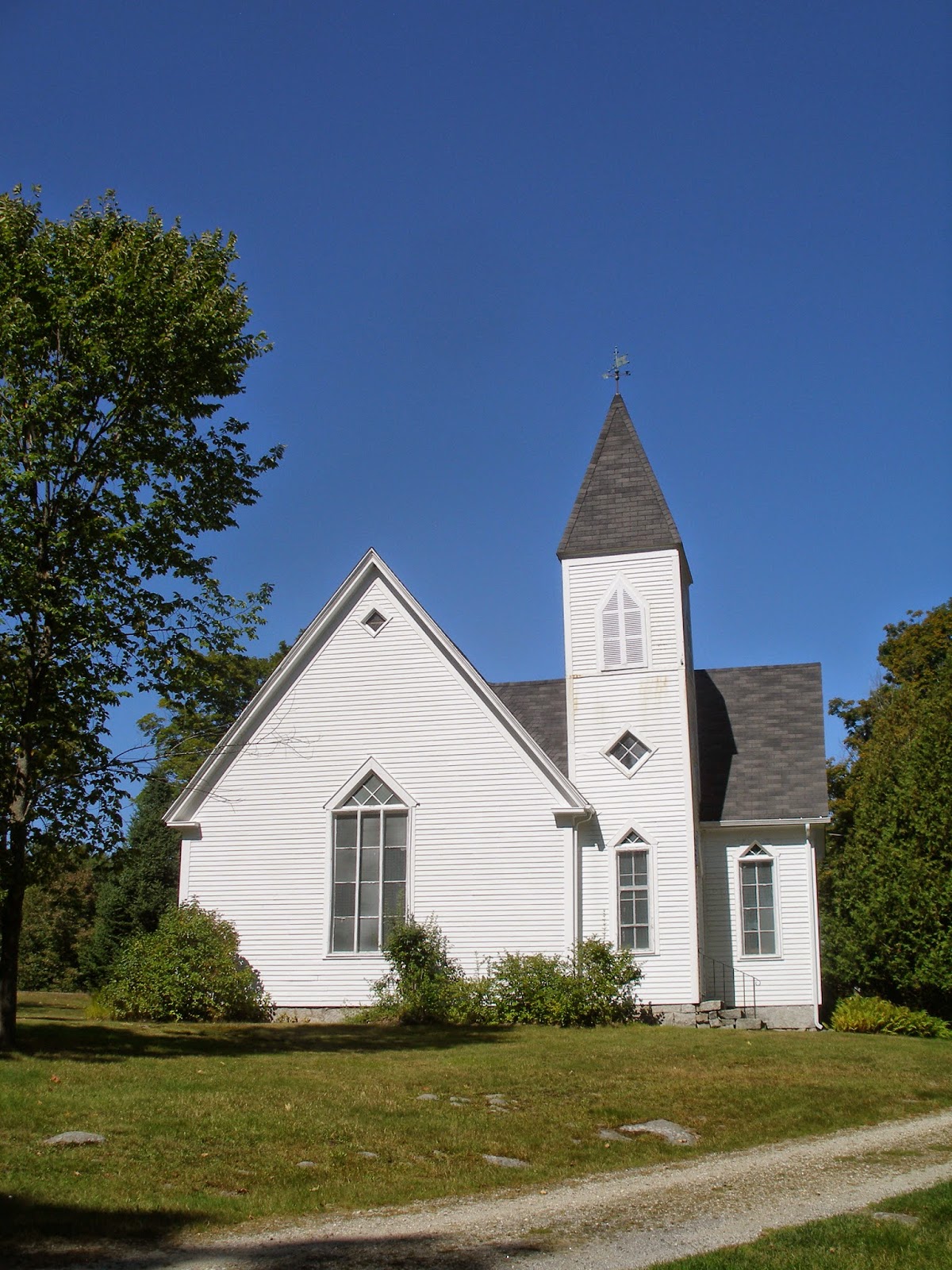 With my friends from Chicago, we visited with Jon Gibson at Gibson Pewter (http://gibsonpewter.com) Sue found just the right charm for her granddaughter and I enjoyed the view of the valley from the big window in the barn.  Stop in just for the view if the open flag is waving.

Go north from Hillsboro Center and make a left onto Gleason Falls Rd.  Cross over Beard Rd and the brook.  Park in the wide spot and walk down to the brook to see an unusual twin bridge - the site of one of the town’s first grist mills.  “This bridge is shrouded in mystery as to when it was built and by whom.  The clever craftsman built a unique bridge which actually consists of a causeway and two bridges over Beard’s Brook.  The span to rise ratio of each arch is what makes this one unique.  While most conventional arches would be semi-circular with a span to rise ratio of 2.0, as it is with one arch, the ration of the other is a staggering 4.37!”  So it isn’t a funky angle of the photo; these arches don’t match. 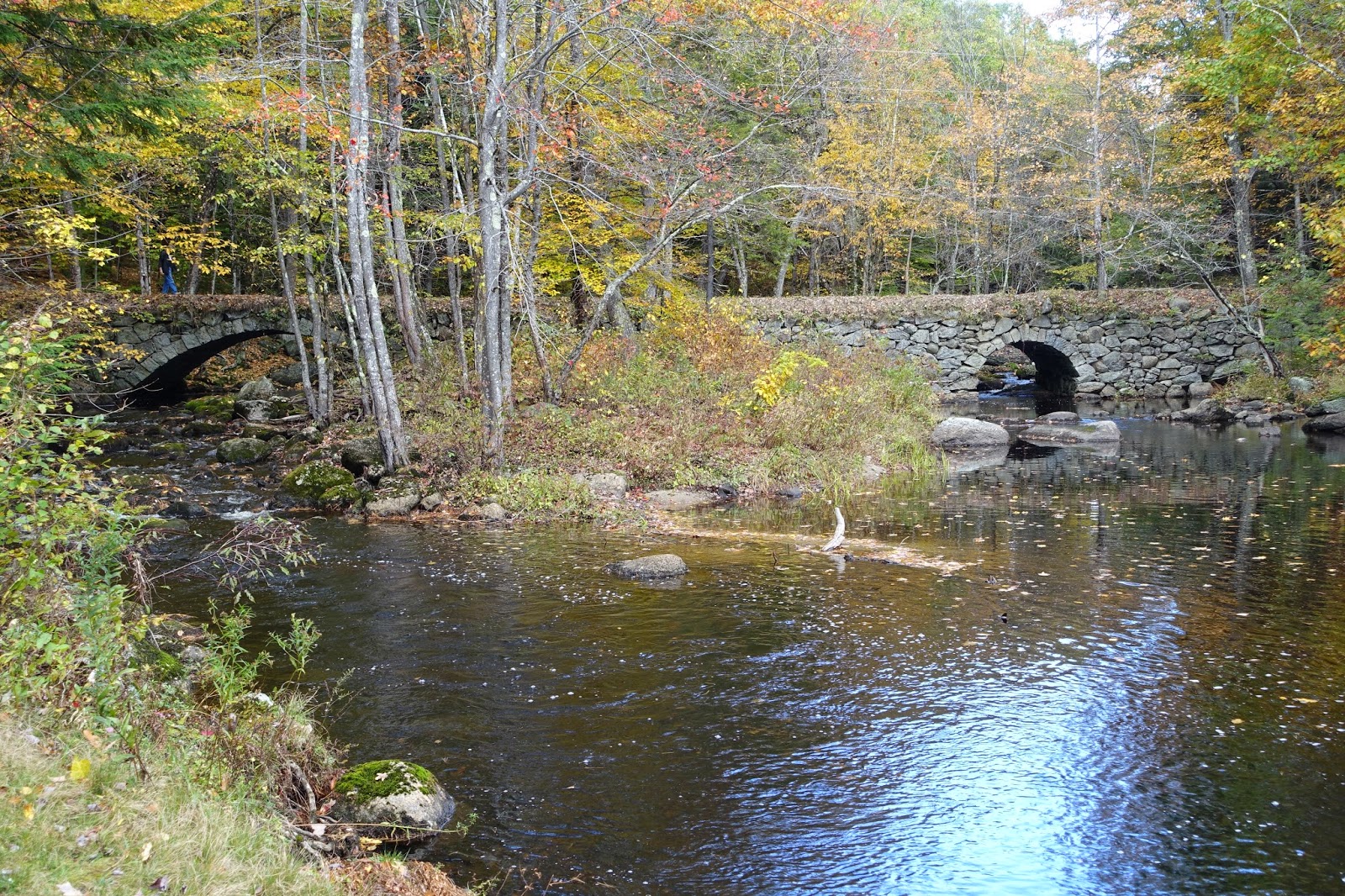 Now this is where we separate the wanderers from the architectural history hounds.

Wanderers –go straight as long as there isn’t snow on the ground or deep mud.  When you come out the other end you will be on the Second NH Turnpike (Rt 31).  Franklin Peirce Homestead will be down the road to the left.  Turning right will open up miles of hills and views – one of our favorite motorcycle rides.

To see more bridges, turn around and go right on Beard Rd.  The first bridge you go over is very impressive after a rain or in the Spring.  This Autumn photo only gives you a suggestion of the rushing water.  Swimming hole anyone? 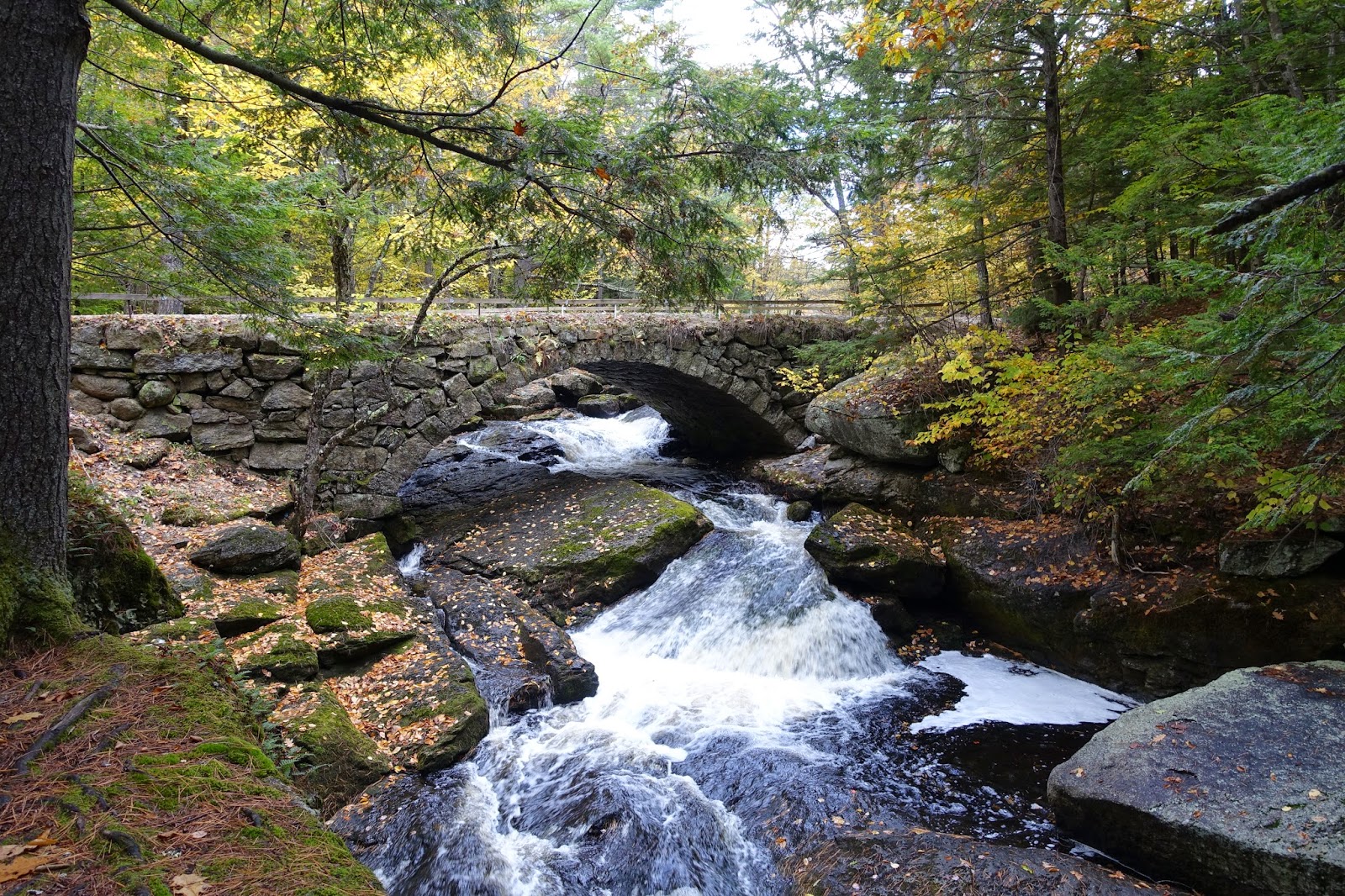 The next bridge is at Jones Rd.  This one is “known as the Old Carr Bridge, built by Captain Jonathan Carr in 1840, and allegedly paid for with counterfeit money.”  Cross the bridge and you’ll be in the fields used for the reenactments of Living History (http://livinghistoryeventnh.com/) held each August. 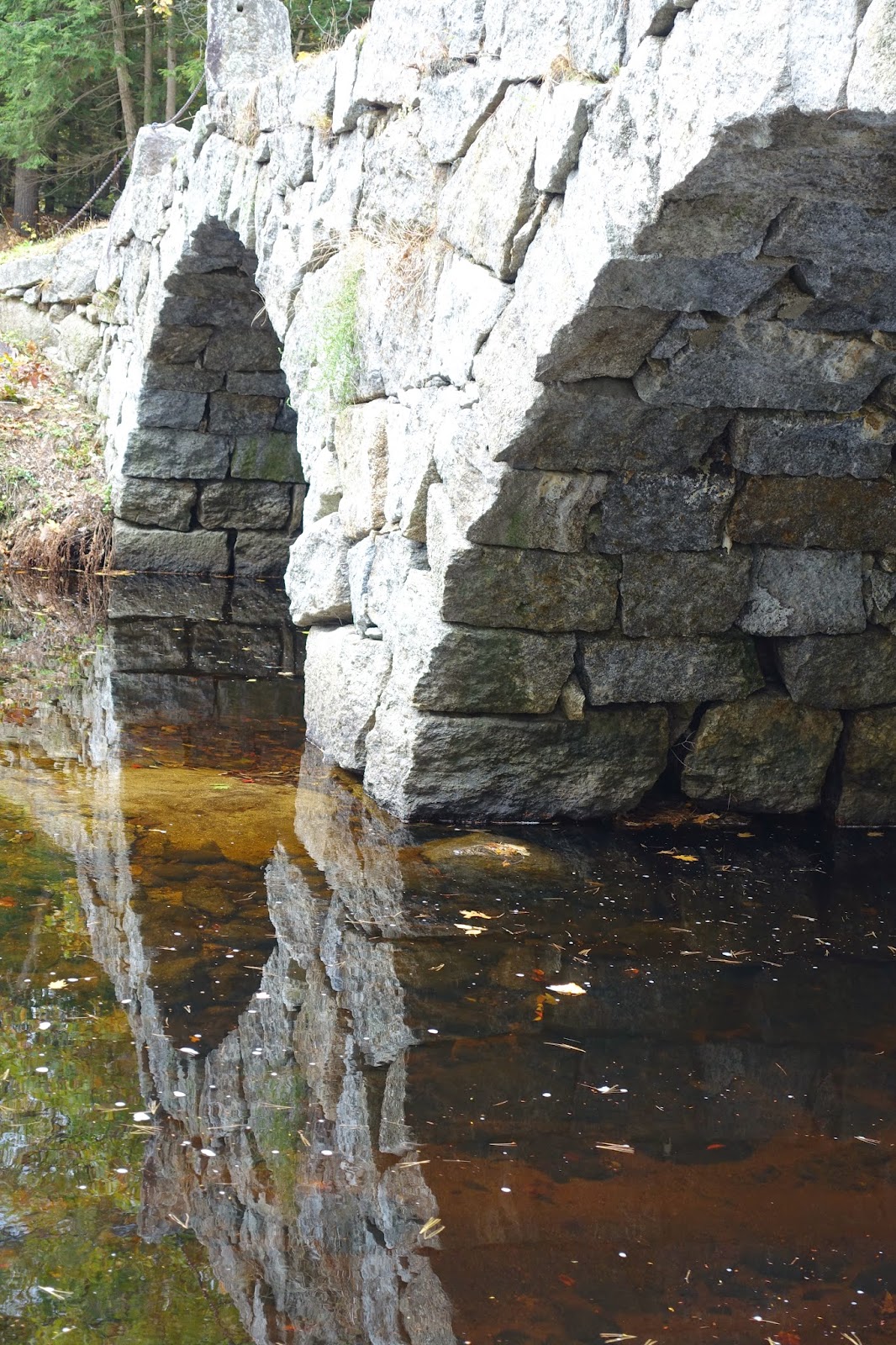 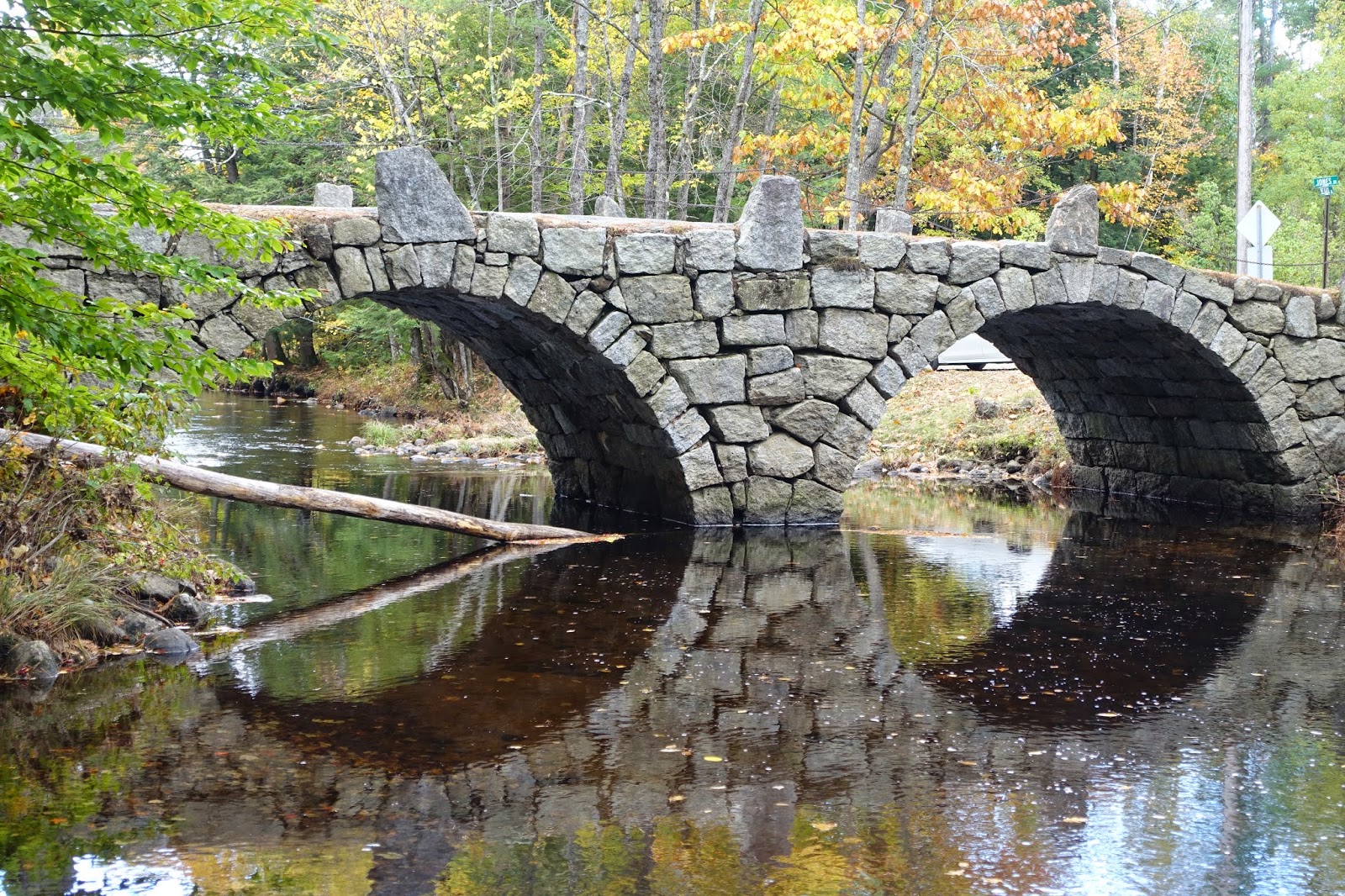 If you continue straight on Beard Rd you will get back to the 21st century.
Posted by Henniker House Bed & Breakfast at 10:08 AM